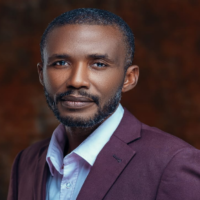 Amb. Livingstone A. Membere is a Chemical/Petrochemical Engineering graduate of the Rivers State University who has carved a niche in the peacebuilding sector. He is currently serving as the Rivers state representative in the Partners for Peace Central Working Committee (CWC0 where is the Public Relations Officer (PRO). He is a pioneer member of the Partners for Peace and has played several roles towards the growth and impact of the P4P network in the state. Livingstone worked with AA PeaceWorks to facilitate the establishment of the PREVENT COMMITTEES in the 9 states of the Niger Delta. He also mentored the Committees to become one of the foremost Early Warning, Early Response Platforms in the Niger Delta.

Amb. Livingstone has experience and contact to work in volatile communities. Between 2017 and 2020, Livingstone and other P4P members designed and implemented an Anti-Cultism Project in Rivers State and was able to pull out more than 200 youths from the circle of violence. Livingstone also worked on Reducing Violence Against Women and Children in Rivers State. The intervention which took place in 8 local government areas brought up the severity of the issue to the mainstream, leading to the establishment of a network committed to protect women and children.

Amb. Livingstone envisioned an expanded partnership that will deepen peace and open up economic opportunities to Niger Delta people.